Mention the words “burnt pork belly ends” and “smoked mac and cheese” and one knows instantly that the conversation is about Luke’s BBQ, a popular local eatery on the outskirts of Coweta at 24767 OK-51 in Broken Arrow. Those are just two of the many delicious menu items that keep customers coming back for more.

In May, Luke’s BBQ, LLC owners Luke and Amanda Tramel joined the Coweta Chamber of Commerce and were welcomed to the organization with a formal ribbon cutting ceremony. Several family members and Chamber representatives joined them for the occasion.

Luke Tramel knows what it takes to make a delicious barbeque meal. He has been cooking barbeque since 1999 when he was working at American Airlines. What began with delivering barbeque to work every Friday turned into weddings, caterings and even competition cooking.

“The next thing you know, I get a call after all those years to see if I would buy Smokin’ Sisters out and ultimately put in a barbeque restaurant,” Tramel explained. “I felt like the Lord led me to do it. I heard His voice along that line, and felt it was my time and His timing for me to do something like this. With that said, here we are!”

Tramel refers to what he does as more of a calling than a job.

“It’s a passion of mine. I really put my heart into it,” he noted. “It’s a calling to reach out to our community and others and to make friendships. It has been an awesome experience!”

Tramel said when growing up in Coweta, he always wanted to be a business owner but never thought it would happen. In fact, he was “pretty shocked” when business ownership became a reality.

“It was a leap of faith for me, but I’m so glad I made that choice!” he exclaimed.

Tramel said what makes the restaurant special for him and his family – wife Amanda, daughter Taytum, son Luke, cousin Zella, nephew and niece Bo and Libbie Tramel and close family friend Becky Cherry – is that each day brings something new with it.

“We see different people every day,” he noted. “You never know what someone is going through or maybe how you’ll affect their life. Here we are able to interact with the public every day and hopefully be a bright spot in their day. We want to show kindness and help people out.”

The restaurant owner has seen other businesses incorporated in the Coweta Chamber and said, “it’s an honor for me to do that as well.”

“We want to be more a part of the community in a sense, be a help and involved along with other businesses in Coweta,” Tramel admitted. “Joining the Chamber is a step up on our game and a branch out for us.”

“It goes fast, especially on Fridays, and lunches are a blur,” Tramel admitted. “We try to keep it fresh every day, keep the barbeque old school and keep doing what we’re doing.” 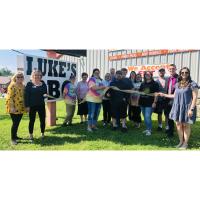